There are two types of pests under the Agricultural Pest Act:

There are many insects that affect various crops throughout Alberta. High risk insect pest species with the potential to cause major crop losses that are actively monitored, surveyed and predicted. The County performs a grasshopper survey and Battle River Research Group and Alberta Agriculture looks for:

Other crop pests that can cause major damage but are not looked for in the County are:

Another source of good information is the Alberta Insect Pest Monitoring Network.

There are two crop diseases that have been declared pests under the Agricultural Pest Act.

Clubroot - since its discovery in the first canola field near Edmonton in 2003, it has spread to several counties in Alberta. Clubroot continues to spread and is a significant concern for Alberta producers. The County has a Clubroot policy and it generally follows the Alberta Clubroot Management Plan that Alberta Agriculture and Forestry put out to minimize yield losses and reduce the further spread and buildup in Alberta.

Blackleg was once a devastating disease that commanded the respect of all canola producers in Western Canada 20 to 30 years ago. The disease received less attention after the introduction of resistant canola cultivars that essentially eliminated the disease risks, especially when sound crop rotation practices were employed with the resistant cultivars. However, blackleg disease is now making a comeback across the Canadian prairies and once again getting lots of attention from those involved or interested in canola production.

The County is also concerned with Fusarium Head Blight also known as scab or tombstone, is a fungal disease of wheat (including durum), barley, oats, and other small cereal grains and corn. Infection of the harvested grain and/or mycotoxin production negatively affects livestock feed, the baking and milling quality of wheat, biofuel (ethanol) production, and the malting and brewing qualities of malt barley. More information about this disease can be found at Fusarium Head Blight of Barley and Wheat and at Let’s Manage It. 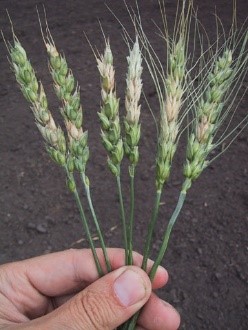 Most disease pests may be prevented or limited by lengthening crop rotations – shortened rotations dramatically increase the risk of infection.

Agricultural Pests include Norway Rats and Wild Boar when at large.

Agricultural Nuisances are things like Coyotes, Skunks, Magpies, and Richardson’s Ground Squirrels. Although this is not a complete list of what is considered a pest and/or nuisance but rather more of the species the County is concerned about.

Copyright 2013 County of Paintearth
Back to Top